Opening day of the season on the river Stort arrived with an enormous expectation. An expectation that evaporated as quickly as it arrived. On the 13th I had walked the side streams around Latton Lock weir pool and observed many chub feeding in the shallow clear water. This day, however, I did not see a single fish. I tackled up with a light quiver tip rod and a float rod and fished the weir pool, but without success. In desperation I moved onto the main river and float fished bread on the slow moving water. I had rarely had much success on the main river below the bridge despite it looking the part.  A slow steady dip on the float and I struck into the first fish of the day, a plump pristine roach looking regal, its red fins glistening in the morning sun. A second, just as plump roach hit the landing net a few minutes later like the second pea in a pod and my day was looking much more promising. 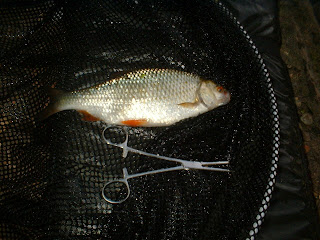 When the float dipped again I was expecting the same result but the rod’s arch and feel through the rod blank told me this was a much better fish. A dull but heavy encounter and the fish, much larger than the previously two, glided over the rim of the landing net. A bream and not some insignificant skimmer but a nice fin perfect four pounder.   After I put it back I just stood on the bank and greedily drank in the atmosphere. Warm sun reflected off the water that carried a mere ting of green. My reverie was broken as two other anglers appeared on the bridge. They had caught a brace of chub further “up river” keeping mum about exactly where. I moved to below the lock and had a couple more splashy yet magnificent roach. The roach has been the mainstay of coarse angling since the days of Walton. That is until the rise of the stocky carp waters and decline in river roach populations has knocked this one time anglers favourite off its number one spot. Now many an English coarse angler would rather chase this large brown gold fish weighing well into ten pound plus bracket than chase a sliver and red finned fish of maybe six to ten ounces. I must admit that chasing carp has become a bit of a recent obsession fuelled mostly by my brother’s love for ciprianous carpio yet the roach remains very close to my heart.
Posted by chubcatcher at 13:05