Returning to the river Stort in July I decided to stick with bread as bait as it had been successful last time.  Back in the same swim that I had the large Bream in before I was only getting small knocks from small fish. There was nothing large enough to take the bread flake. The evening was drawing on when I decided to try on the side stream where there is more flow. First cast the waggler float disappeared and my fist chub of the season was attached. It graced the landing net and weighed a nice two pounds 9 ounces. Happy with this I return home. 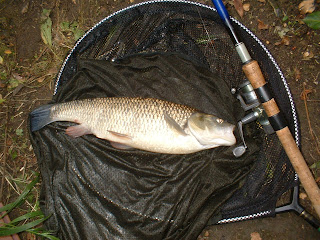 However, I could not get my thoughts away from another sided stream that I had spotted so a few days later returned to the river. To get to the side stream I had to walk along the main road without a path carrying my net, rod, and tackle bag. Not for the faint hearted as I ran the gauntlet of mad van drivers. Eventually I reached a gap by a tree where the stream runs under the road. Baiting up with sweet corn it did not take me long to have a nice plump 3 pounder in the net. Now once you have one chub from a small stream it’s pointless staying on and it’s better to move. Move I did all along the main river without a touch on the quiver tip. Eventually i returned to the swim from the previous session. The thing with chub is if you are stealthy enough you do not need special tackle. And this session was no exception. Kneeling among the head high stinging nettles, hand poised over the handle of the rod every sense in neutral ready to pounce. Not long but it felt like hours the tip flew round and the heavy thudding fight was on. Lots of speed at first but very soon the fish was in the net. A very nice looking 4 pound chub from a tiny stream. It’s a trick that never fails to impress me.
Posted by chubcatcher at 14:28