Chasing big carp in the winter.

My view has been “what’s the point” carp fishing in winter is a mugs game. Come October my carp rods have been put away as I look forward to traditional winter coarse fishing chasing pike, perch and chub. Indeed a few winters ago I spent every opportunity to fish a small stretch of the river Stort in for these winter species. Ok so the carp mags still have pictures of carp captures in but I was always sceptical, were they really caught in mid December as the article said? No its much better be after the reliable fish. All this changed however when I met Pat. Being the bailiff of a syndicate lake he said he would chase big carp in the winter and was often successful. Another member told me he would always prefer the syndicate lake from October onwards as the weed would be less of a problem.  Surely they were mad. Maybe this said more about my own style of carp fishing. I tend to fish runs waters in the summer when the fish are spread out. I pay only a little time to location and I am not always that quiet. Still I have been fairly successful catching any number of carp into mid double figures. But when winter comes the fish shoal up and you can’t just chuck in anywhere or even to a likely structure. You have to be where the fish are.  Also they will have feeding spells rather than just eat all the time as their metabolism slows and they need less food. And I think that was always my problem I lacked the competency to know exactly where they were or how to fish for them. 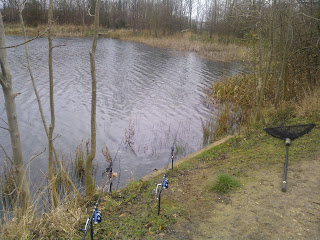 The way Pat went about the business of carp fishing in the winter was all about preparation. He watched the water, consulted weather patterns found and followed the fish. He fed the spots where he found them on when they were not there and somewhere else. He got to know their feeding spells. All this in the days before actually going fishing.  There is an army saying that time spent on reconnaissance is rarely wasted.  His tackle is ordered and neat and he leaves little to chance.

He was quiet on the bank. Carp anglers have an often deserved reputation for being loud, banging in bivvy pegs and shouting to their mates on the far side of the lake.   Not Pat. If the fish were close in he was walking round like he was on egg shells. As Issac Walton once wrote “study to be quiet”.
On the day in question I was amazed that we had two low double carp within a couple of hours of being on the lake. Perhaps fishing for carp in the winter was not such a waste of time.  However, that amazment turned into wonder as in early afternoon Pat landed a superb 26 pound 2 oz mirror carp. 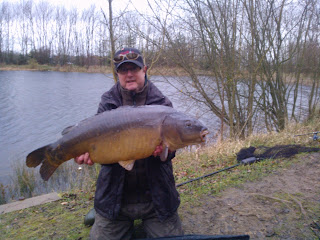 Ok so he really knows the water and lives very close by so can recce it every day. That being said it really shows what can be achieved with some single minded dedication and hard work. Still think I may go after the pike and perch in the winter but carp may come more into the equation now.
Posted by chubcatcher at 12:06