Being close to nature is a very important part of my fishing as it is for many other anglers. The sights, smells and sounds of nature are essential elements to the enjoyment. These elements are heightened when fishing into the night. As darkness looms the angler becomes more aware of  his surroundings.  Owls, foxes, and the bark of a Muntjac deer add an alluring atmosphere in the gloom.  Pipistrelle bats swoop low over the surface of the lake sipping insects that have just emerged from the water, their dark shapes standout against the glow of the water.  When on a river the sound of moving water seems louder and more defiant than during the day. On a lake the sudden crash of a Carp in close proximity can be as like an electric shock against the night.
Checking all is ok with the rods before turning in for the night can become a ritual in itself, checking the bait runners are engaged, can the line can move freely?  Are the alarms audible? Then laying awake in the sleeping bag, tired yet seemingly far from sleep as you mind is in gear for action. Every sound  is magnified. A leaf drops onto the roof and seems to vibrate the whole bivvy. 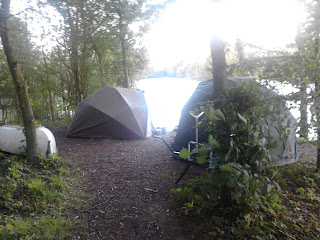 Sleep comes but then the sound of the alarm screams into the night and through the musty feeling of wakefulness you realise that it is your alarm. You dive out into the cool of the night. Playing a big fish in the dark is like being on a Ghost train.  Eerie light from a torch or moon can barely pierce the inky blackness. The sound of the reels clutch as it gives line is sweet music and the power of a large carp can feel like you have hooked a juggernaut.  You only really see the fish as you net it and you still have no real knowledge of its size until it is on the unhooking mat. There in the folds of the net you stare at your prize illuminated in the head torch.  Large carp look magnificent in the half light, the scales of mirror carp seem to shine out into night. After the fish is returned sleep seems a long way off as residual adrenaline still pumps around the body.  Small midges, attracted by the light of the head torch  dance in front of your eyes. Back in the bivvy sleep comes eventually and its a sleep of the satisfied man.
Posted by chubcatcher at 13:27