When thinking about what fishing means to me I often turn to Literature to see what glimpses into the pool of my soul can be found there. Among the sources for me are the writings of Ted Hughes. For those who don’t know Ted Hughes was one of the greatest poets of the 20th Century, he was poet Laureate from 1984 until his death in 1998. His work regarding nature is often cited as showing the difference between poets of the 20th century as compared with nature poets of earlier times in that he did not idolise nature as Wordsworth might have but, having an understanding of evolution saw nature in the raw as the struggle for survival that is surely is. He saw menace as well as wonder in the natural world. In his poem Pike he observes
A pond I fished, fifty yards across,
Whose lilies and muscular tench
Had outlasted every visible stone
Of the monastery that planted them-

Stilled legendary depth:
It was as deep as England. It held
Pike too immense to stir, so immense and old
That past nightfall I dared not cast

Hughes was a regular fly fisher and campaigned for netting of Salmon to be restricted as well as contributing to the book West Country Fly Fishing for which all the proceeds going to the West country rivers trust. He also believed that children should have a chance to experience life in the countryside as a way of development of skills and so they had an understanding of the natural world. 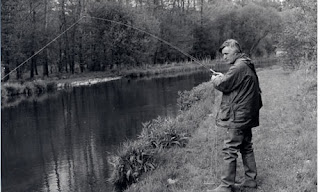 http://www.guardian.co.uk
Overall I think that Ted Hughes deserves a place in the hearts of all anglers as he was surely one of us. A select band of brothers and sisters who chase a connection with something greater than themselves in the watery world and on its banks.