Serendipity, a happy accident (or luck as some may call it)

We all like to think that as competent anglers we don’t really need lady luck to cast her magic upon us. We sneer at the non angler who says ‘good luck’ when they know we are about to embark on a fishing trip. We know its not luck, its about good planning, good watercraft, good bait, or good rigs or all those and many more things. When an angler sets out to a target fish of a particular size and then catch that fish we know its all about planning and getting it right on the day . But what about those happy accidents? I was reading a book by David Phiilps, in it he said that his pb carp came while roach fishing and his pb Zander came when pike fishing. I recently had such a capture when I caught my first Catfish at 44 pounds from my syndicate water. On the opening weekend after a 6 week lay off. I was fishing a short morning session for the carp with my friend Pat. Eager to be tight to a feature I cast towards reeds on the opposite side of the lake. My cast was far less that perfect and the rig dropped some way short and into deep water. With carp being caught mostly from shallower water it was unlikely that I would get a take from there. As my second rod was cast close to my own bank I took the lazy way out and said I would just leave if for a bit. “Well don’t blame me if you hook a Catfish” came the statement from Pat. Catfish were waking up after their winter’s inactivity and were known to prowl the deep water. 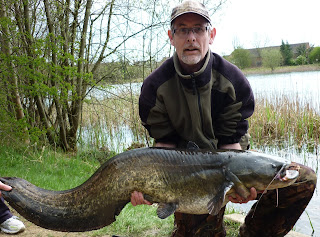 The take was slow, the battle hard and ferocious. The fish managed to weed itself and we had to wait for it to swim out. As it broke surface I was reminded of Loch Ness monster tales. With help we managed to get it on the bank. My size 6 hook well in scissors of the mouth and the coated braid hook length had stood up to the rigours of the fight. After being photographed and weighed it was slipped back into the lake. This was clearly a serendipitous capture but I would argue not exactly luck. True I was fishing for carp with a large boilie and not the catfish. However, it was Pat’s statement about the bait being in the spot for Catfish that was partly reason why I had left if where it was? Its not really luck more it was making your own luck. Louis Pasteur said that "Luck favours the prepared mind”.  Indeed Dunbar and colleagues estimate that between 30% and 50% of all scientific discoveries are, in some sense, accidental. Anticipating good fortune and being able capitalise on it if it occurs is as important in fishing as it is in science or business.
Posted by chubcatcher at 04:05