Some of us remember the great storm of 1987. This week we were promised a repeat. To be honest we have had stronger storms before and since but why that one is remembered is the damage it caused. The reason it caused so much damage is that it occurred while the trees were full of leaves. The normal winter winds are from December to March when the trees are bare. The Sunday before the ‘Great Storm of 2013’ I had a wander around the syndicate lake with a pike rod. Apart from a dropped run, I did not connect with a fish.  Still it was nice to be out. I bumped into young Kenny who was bivvied up. He was Pike fishing during the day and planning to Carp fish through the night. Apparently he got through the night unscathed and had a carp as well. The storms passed and I decided to have a go on the lake and went a few days later. I decided to go for a Pike and fished next to Pat who was Carp fishing to the reed line. His approach is to put the rig as close to the reed line as possible as we were seeing the reeds move alarmingly. Pat’s optimism was rewarded when he connected with a very nice common carp of 14 pounds and it looked lovely in its winter colours.
To prove it was no fluke he winkled out another one, this time a mirror carp slightly smaller. It has to be said that he has fished the lake for 16 years and retired so when not fishing he is often walking the lake looking for fish. 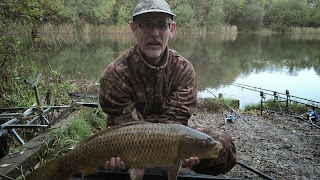 But even as he walked round to pick up his lunch from his wife his right hand rod was away and I had no choice but to land a nice 10 pound ghost common. Pat did not mind and joked it was appropriate to catch a ghostie on Halloween. He went on to catch another one himself. 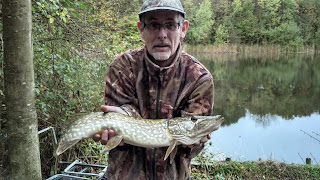 I had one 3 pound jack pike to show for my efforts and all in all a very pleasant day it was to be fishing and actually catching fish. My winter fishing starts here and I am sure it will be full of twists and turns as usual.
Posted by chubcatcher at 11:50