Fishing Review of the year 2013

January started with a trip to the Brentwood carp show. So much stuff it was hard to resist throwing money around. I bought some pop ups that I thought would later account for some very nice fish. Pat and Ian were able to catch up with old pals. All in all a very interesting day was had by all.
With Pat showing me that carp fishing is not as hard in the winter as i had previously thought we decided to try our luck at Cuton Lakes near Chlemsford on a freezing cold February day. I learned that accurate casting to a feature and corresponding accuracy in feeding could bring about success. Despite the cold causing the landing net to freeze up we caught carp and I managed my biggest winter carp of 14 pounds. I would have been happy with that in the summer on most years.
March and brother Andy and I decided to fish a very flooded Tuffnel mere. I cast to some sunken trees with the new pop up boilies and was rewarded with a couple of small carp to 7 pounds. I knew those boilies were a winner. 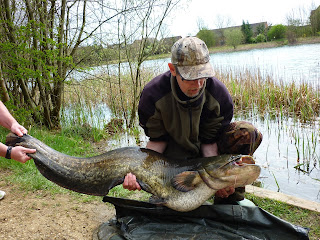 April and i had my first proper session as a member of Soapers syndicate lake at the end of my road. A poor cast on my part meant i landed short and the rig was in very deep water. “Don’t blame me if you catch a Cat fish says Pat. One hour later the buzzer was screaming and the bobbin lifting. The fight was as hard as anything i had felt before and what broke the surface reminded me of the Loch Ness monster. A huge Cat fish that took two people to lift out. On the scales it went a shade over 44 pounds. This is a fish of a lifetime that i will be hard pressed to match let alone beat.

May found me night fishing on Soapers and my first session of the year on Wicks despite much of the lake being out of bounds due to unstable trees, i did well. On wicks i had a Carp of 19 pounds 8 and 16.10. A night session on Soapers led to me catching a Carp of 19 pounds 4. Surely it was only a matter of time until i had one over the magic 20 pounds. A feeder session accounted for some bream and small carp at Tuffnell with Andy.
July lead to me fishing a night session on my own. This was my first time flying solo so to speak as all my other nights were fished in the company of others. It was a warm night and i kept the bivvy door open and laid on the bed chair drifting in and out of sleep. At 5 in the morning i watched the dawn break over the lake, mists were coming off the surface of the water and at around 6.30  the sun started to break over the trees. At 9.00 am I had a carp in the net. It was a very pretty 13 pounder.

August found me having a couple of nights on Blunts mere near Chelmsford. I was able to witness my brother Andy Catch a lovely 21 pound 6 ounce common carp and i had yet another 19 pounder. 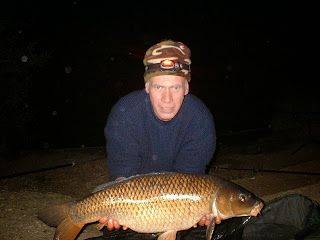 September found me mostly on Soapers and for the most part I was blanking except for a lovely 14 pound Mirror Carp. It’s a hard lake at the best of times and I can’t moan with the quality of the fish I was able catch, even if they were slow in coming. One day fishing on Soapers with my brother resulted in one missed run for him and silent buzzers for me. Well that’s fishing.
Autumn was nothing to write home about and to be honest a combination of work weather and home commitments led me to being away from the bank side.  Apart from a nice Jack Pike on my light spinning rod and an 11 pound carp caught on Pat’s rod my very few sessions were not memorable. A nice session with Andy on the Folly led to no Pike for me and no Carp for him but we had a nice catch up nonetheless.
When I look back I realise that 2013 had a very “Specimen” look about it going for larger fish and suffering the blanks that come along with this approach. I have learned lots and it’s been fun. As I write I am unsure what 2014 will bring. Soapers has been sold so we will have to see. So not going to plan too much yet, just keep my powder dry and see what happens.