Bream Chase
The jet stream was too low they said. That was the reason that it had rained almost constantly for two solid months. My week off coincided with the Queens Jubilee that was washed out but went on regardless of the weather. I was hoping to do lots of different types of fishing that week. I wanted to float fish for crucian carp, carp fish a gravel pit, and later fish the opening of the river season for chub. In the end all I did was a quick afternoon/evening session on an old lake that is leased by the club. The lake was previously run by a large angling consortium who had taken lots of their fish out when they gave up the lease.  What is left are a few large carp, rudd, pike, perch and some old dark bronze bream.  My brother decided to have a go for the carp that push twenty pounds; I set up a feeder rod, using pellet paste on a small method feeder and a size 14 hook with a quick stop hair and sweet corn for bait or small mini white shellfish boilies. I catapulted a fair amount of pellets next to some lily pads, very soon the tell tale bubbling started to let me know fish were in the area. 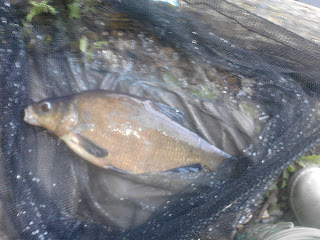 Despite this it took a while for a proper bite, a few dibs on the quiver were all I had until a proper wrap around on the tip and I was into a fish. The usual dull fight told me it was a bream the fish when on the mat did not disappoint; it was a nice dark fish almost like a fish from a large Irish Lough than from a small Essex pit. Small drops of rain arrived on the back of my fishing brolly and the ubiquitous rain returned however mercifully it was a short shower. My brothers carp rods stayed still and quiet as he took to watching my quiver tip, which was good as I was looking away and he shouted out that the tip had pulled round. Another four pound, or thereabouts, bream hit the landing net. No one will fish for bream for their fighting qualities but old wiley bream can be hard to tempt even when you have loads in your swim. These are not commercial fishery bream there is plenty of food for them and they can be discerning, it can take a bit to tempt them. A kingfisher traversed the lake, a flash of blue against the foliage.  Evening was drawing in, the water was still bubbling as fish tore up the bottom of the lake to feed. Time for another pull round on the quiver and another bream graced the landing net.  Darkness was not far away and as I packed away the fishing gear I felt that I should have caught more considering the activity in my swim but anglers nearly always are unsatisfied, which is why we always return I suppose.
Posted by chubcatcher at 14:46