During the river close season I had visited a local commercial fishery called Timberlands. Now commercials are not everyone’s cup of tea. Many dislike the artificial nature of these lakes that are managed and stocked with a high density of, usually, carp. The match angler often loves such places where each competitor can fish on a level playing field, winning means you have been the most skilful rather than had the most luck as all swims have fish in them. For me they are second best to more wild venues and fish caught in them usually have less value than a truly wild fish from a river. That being said if they are thoughtfully run and are not just carp puddles then they have their place for me. When they are mixed fisheries where you don’t know what is going to be caught next can in itself be fun and is especially good for getting children into angling. This venue has a few lakes and in one they rather, unusually for a commercial, have some rather large bream into double figures and I had been lucky enough in the past to catch them to over five pounds. Like many anglers I go fishing to enjoy the solitude and on commercial fisheries you usually have to fish alongside many others and if they are poorly behaved (loud radio playing shouting casting over your lines) then the whole experience is rather unpleasant. The sound of an angler constantly tinkering with his electronic bite alarm can be particularly annoying and there is a protocol that is while setting the bobbin keep the alarm off until it is set then switch on. Too many anglers ignore such protocol unfortunately. If well others are well behaved then the experience can be at least more agreeable and occasionally chatting with others of the fishy persuasion can itself be rewarding.

I had heard that the owner had put in some rather large tench so I returned in late June to try for one of these fish. I am not an out and out specimen hunter. Those dedicated men who grimly sit it out for days for one chance at a larger than average specimen becoming more and more obsessive are not a group that I belong to. That is not to say that I don’t treat my fishing seriously because I do. It also does not mean that I do not want to catch bigger fish because I do. It’s just that enjoyment is more important than size and reducing fishing to a numbers game of pounds and ounces seems to reduce my enjoyment and that is not something I want to happen.

An eleven millimetre halibut pellet fished under a float was my choice of attack on this day. The float is a wonderfully sensitive way to fish but when there are so many small fish around it is perhaps too sensitive as small rudd pecked away cause fast dibs on the float and the temptation to strike became overwhelming on occasions and I bought up the rod fast into thin air cursing my own stupidity more than cursing the fish. Its times like this when I am reminded that fishing is a great leveller and a lesson for life. Stupendous success is rare, monotonous half success more common and utter frustration and failure bought about by ones own shortcomings the most common experience of all. In this way fishing magnifies life itself. The real lesson is to at least try and in doing so to grow and learn with the experience. 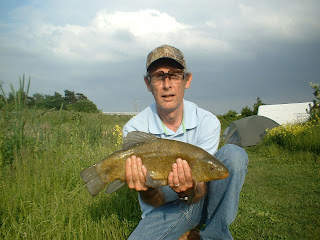 Eventually I managed to get into the zone. I was relaxed and still and now managing to ignore the pecking rudd and promised that I would only strike on a proper sail away bite. When it came I was almost hypnotised that I seemed to forget to strike. However, I lifted into the fish and the water erupted in front of me. The rod took on a satisfying bend and the reel locked up as I had forgotten to set the drag and was lucky that this did not result in a hook pull. I realised, as the fish slide majestically over the rim of my landing net that this was a personal best tench. The Green slimy tench with its red eye nestled in the folds of the net I knew it was job done for the day. Weighed and photographed he (as it was a male tench with large pectoral fins) was returned to the water. At five pounds eight ounces it was not going to break any records. Because of the late 1990’s explosion of double figure tench gracing the pages of the angling press a mere five pounder does not seem to be so big but in my youth the tench record less than nine pounds and a five pounder was seen as a specimen. To me it was a rather pleasurable catch and a male fish at that which usually grow smaller than their female equivalents. Ok it was caught in a lake on a commercial fishery yet it I was happy with it and the fish was in good condition which showed that despite their poor reputations commercials don’t need to be poorly run. Other anglers on the lake were generous with their praise when I told them of my capture then returned silently to their pursuits, minding there own business and not causing any nuisance to other anglers.
Posted by chubcatcher at 14:27