The early morning drive through sleepy villages and twisting roads to the coast is always filled with anticipation. The Thames Estuary and into the north sea is rather unforgiving at times and I would be better off carp fishing if I wanted to be certain of catching. However, there is a special feeling to going out in a boat and trying and be a master of the angle. Walking down the causeway the sounds, as well as the sights and smells are overwhelmingly evocative. The unmistakable ting ting sound of rigging hitting the masts of yachts, the sound of ebbing tide lapping round the breakwater and the high call of gulls, yes you are going sea fishing.   Compatriots arrive to join the wait. Those fellows with whom you will share the adventures, some you know from previous voyages, and some you don’t know. Conversation is slow at first as all members of this happy band want to drink in the atmosphere. Eventually though the inevitable talk concerns the usual topics such as what will be caught, how strong the tide will be and what baits should be tried first. The boat arrives; ruddy faces skipper calls us on, carrying our loads of gear and testing our sea legs we are getting prepared. The draw is made to decide which part of the boat each angler will fish from. The long slow crawl to the fishing grounds allows the anglers to check rigs, tackle up and take in the sights of the coastline disappearing as the boat heads out. 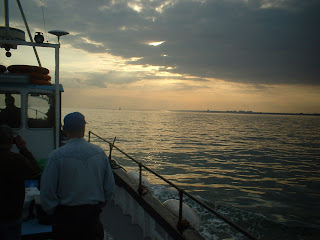 The skipper stops the boat and puts down the anchor. “Heads”  comes the shout as casts are made. Grim determination dawns as men watch the tip of the rod for a slight indication. A few rattles on the tip and a slow pull and the fish is on. The smoothound fight is strong as you would expect from a member of the shark family. If the fish wants to dive you better let it. Once you have it safely on the boat there is time to admire this wonderful fish. I always return smoothhounds and its great to see them swim away strongly.  The trip home is often full of thoughts as land comes into view. Lazy looking seals bask on the mudflats as the boat negotiates the channels and the skilful skipper brings us home to dry land. I am only an occasional sea angler but even the most dyed in the wool freshwater angler can enjoy the changing pace when getting afloat on the sea.
Posted by chubcatcher at 12:25